The Chicken Cloaca: How Chickens Poop and Reproduce (And Why Chickens Don’t Technically Pee)

If you’ve ever seen a chicken’s body, you might wonder where all its excretory holes are. For humans, it varies according to sex: men have urethras for urinating and releasing ejaculation and a rectal sphincter behind them for excreting feces; for women, we have a urethra for urinating, a vagina for sexual reproduction, and a rectal sphincter for waste.
While other animals have their own versions of it, you won’t find any of these on a chicken. Instead, you’ll only find one hole under its tail. This is called a cloaca (cloacae for plural holes) and serves as the hole where chickens release their waste and the hole chickens use to reproduce. Here’s how they do it.

Unlike many animals that have bladders and release both urine and feces, birds like chickens do not pee. When mammals like humans pee, it’s because our bodies remove excess nitrogen by converting it into urea and sending it to the bladder for storage until it is released as urine.
Birds, however, do not have bladders and convert nitrogen into uric acid. It takes more energy on the bird’s metabolism but takes up less water and weight. This turns into uric acid crystals that are deposited into bird poop, which is then excreted through the cloaca. This means their poop already contains their urine. If you’ve ever had to clean chicken feces, you might notice that it has a white layer along with the mostly brown feces. The white layer is the acid crystals that formed and clung to the poop.
So, technically, chickens do not pee but instead excrete waste that can be considered both their pee and poop. The only bird that does it slightly different is the ostrich because it pees and poops through their cloacae. However, their excretion always happens at the same time: first, they release liquid and then solid waste. This is unlike other birds that clump both urine and feces together.

Despite not having a penis or vagina, chickens can still reproduce sexually. To do this, a hen and a rooster must perform something that is called the “cloacal kiss,” a process that takes a few seconds where roosters mount a hen and connect their cloacae to form a bridge for his sperm to enter the hen’s uterus.
A rooster can start producing sperm and reaching sexual maturity as early as 4 months after hatching, while female chicks reach sexual maturity by 6 months. A hen can start laying eggs around this time even without mating with a rooster, but these eggs remain unfertilized and cannot produce a chick.
To mate, a rooster must first perform a mating dance where he signals his intention to mate. If the hen is willing, she lowers her back and allows the rooster to climb on top of her and raises her tail to reveal her cloaca. The rooster then completes the cloacal kiss by connecting his cloaca with hers for a few seconds, allow his sperm cells to travel up her oviduct.
While in the oviduct, the sperm cells then wait to find a yolk to fertilize. The egg then develops until it has a hard shell surrounding the yolk before the hen lays it. This egg can still be eaten if cooled immediately or placed in an environment where the egg cannot develop into a chick. Otherwise, if the egg is incubated for around 21 days (usually with the hen sitting on a batch of fertilized eggs), the egg hatches and a chick is born.

More on the Cloaca 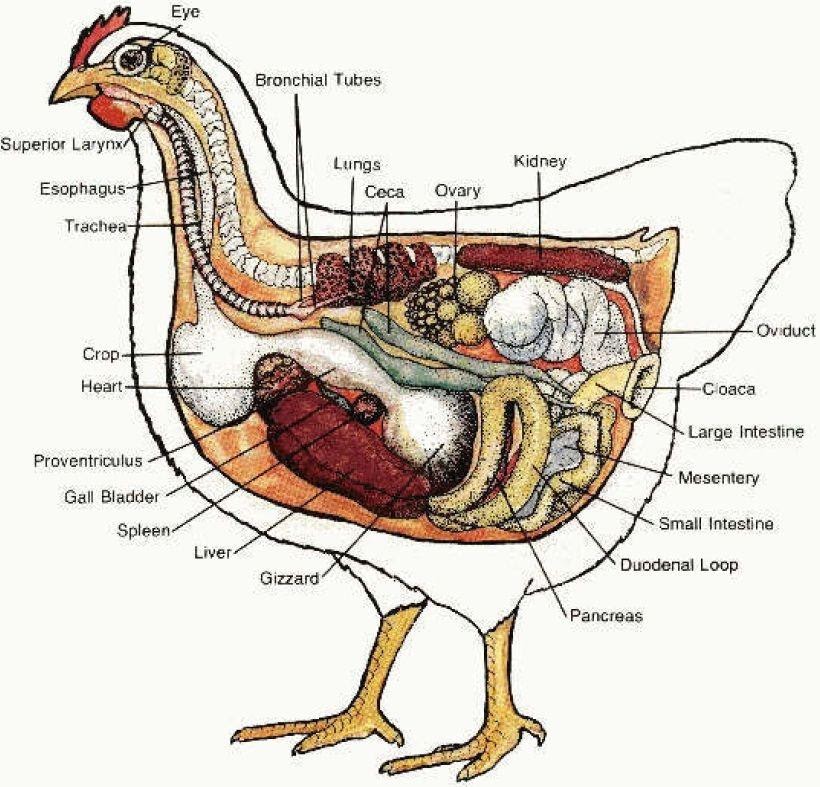 The cloaca is connected to the digestive, excretory, and reproductive tracts of a bird, which is why it serves as the opening for all three bodily functions. All three functions connecting to the cloaca have muscle and skin folds that separate the cloaca from the rest of the systems, thus making the cloaca a sort of chamber with different purposes. The external slit where you can find the cloaca is called the “vent.”
Aside from waste excretion and reproduction, some bird species use their cloacae as a way to regulate their body temperature. If you find that a bird has a swollen cloaca, it’s possible that their body temperature is slightly high and they are trying to cool down through evaporative cooling. This is similar to the way dogs stick out their tongues and pant as a form of cooling down.
Aside from birds, you’ll find that other species outside of the bird classification have cloacae. Amphibians, reptiles, and some forms of fishes like sharks and rays also have a cloaca. Their bodies are also structured in such a way that there is one hole reserved for their digestive, excretory, and reproductive system.

Let’s recap on today’s article: chickens have cloacae, which serves as the hole for excretory and reproductive purposes. While chickens can’t technically pee, their excretory system provides a method for them to safely remove waste. Their bodies also use the same hole to transfer sperm between a rooster and a hen while at the same time releasing a fertilized on the unfertilized egg.